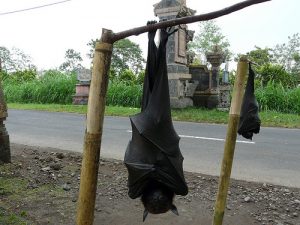 What is the world’s largest bat, 【megabat】？

The bat, which is ordinary seen in the cave, night forest, and some dark underground.

some of them are little size but, megabat might be bigger than you think.

This article introduces the largest bat in the world. 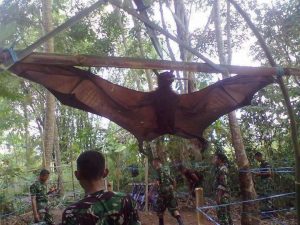 this bat is called, “Megabat” or “Flying fox”

(・∀・)It was named “Flying fox” because its face resembles a fox.

Flying fox seems to be eating a person’s neck, but it’s actually a normal fruit bat that eats bananas instead of meat.

(´Д｀)If attacked by this, the baby will also return to the mother’s body. 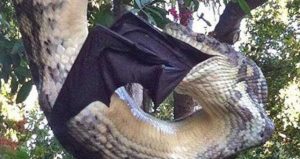 ↑But it is eaten by crocodile

This flying fox has other characteristics besides being big.

The other ordinary bats live mainly on hearing but, flying foxes have very well-developed vision and are good at night.

They live mainly in the tropics

By the way, the Karan tribes in Papua New Guinea are hunting flying foxes and eating them as a treat.